Visit to get our entire library of TED Talks, transcripts, translations, personalized talk recommendations and more.

Today’s youth have inherited a big, unprecedented climate problem to solve — and the eco-anxiety to go with it. Gen-Zer and activist Clover Hogan knows the struggle firsthand, but she also understands the path to climate action starts with the one thing you can control: your mindset.

The TED Talks channel features the best talks and performances from the TED Conference, where the world’s leading thinkers and doers give the talk of their lives in 18 minutes (or less). Look for talks on Technology, Entertainment and Design — plus science, business, global issues, the arts and more. You’re welcome to link to or embed these videos, forward them to others and share these ideas with people you know.

TED’s videos may be used for non-commercial purposes under a Creative Commons License, Attribution–Non Commercial–No Derivatives (or the CC BY – NC – ND 4.0 International) and in accordance with our TED Talks Usage Policy (). For more information on using TED for commercial purposes (e.g. employee learning, in a film or online course), please submit a Media Request at

I grew up in Australia’s
Tropical North Queensland,

fishing frogs from the toilet

and dodging snakes
that hung from the ceiling.

Wetting down old sea turtles
stranded at low tide outside our house.

I spent more time outside than in,

delighting in the wonders of nature.

By age 11, I wasn’t allowed
to watch horror films,

so I turned to documentaries instead.

The first time I experienced heartbreak

was when I sat glued
to my computer screen,

staring at mass dolphin hunts
that turned the shoreline red.

Staring as million-year-old forests
were bulldozed to produce Big Macs,

that showed how quickly
we were devouring the Earth.

And how good we were
at pretending otherwise.

The second time I experienced heartbreak
was in November of 2019,

as I watched my country go up in flames.

As one billion animals
were incinerated by the inferno.

As friends tried to rescue their homes,

armed with hoses until the smoke
and embers clung to their clothes.

And staring at that wall of fire

higher and more ferocious
than any I’d seen before,

powerless to stop the flames,

powerless to protect the place I love.

as their summer rolled around,

as well as flooding in Jakarta
that displaced 100,000 people.

More violent hurricanes
along the east coast of America

and biblical plagues of locusts
that threaten the food supply

for millions of people in East Africa.

Young people today
have not created this reality.

Yet we’re told where the last generation

with a chance to save
the fate of humanity.

Is it any wonder that there is an epidemic
of mental health problems?

Eco-anxiety is on the rise

and young people seem to be
some of the worst affected.

Research from 2019 showed that in the UK,

even guilt around climate change.

Environmental disaster is the biggest
mental health issue of our lifetimes

and in our war against nature
young minds are the collateral damage.

At my own organization, Force of Nature,

we’ve witnessed the same
on a global scale.

We’ve been talking to students
in over 50 countries

from Tel Aviv through Jakarta,

All of them have shared
this existential dread

that keeps them up at night.

Dread not only fueled by doom scrolling,

but by the belief that adults,

especially adults in power, do not care.

When I first discovered documentaries,

I decided the world was run by people
who were selfish and greedy,

that the rest of society didn’t care.

That we humans were a plague
on our own planet.

I’ve since spent the past 10 years
lobbying decision makers across business,

working with students in the classroom

and chief executives in the boardroom,

and I can tell you that my bleak outlook,

while in some ways right,

Picture yourself as a senior executive
at a big multinational.

In the 25 years you’ve been climbing
that corporate ladder,

you’ve been told your job is to make money

and maintain the status quo,

to deliver value to shareholders,

to avoid the kind of risks
that could cost you your job.

You even went vegetarian two years ago,

after watching a documentary
on mass farming.

Yet when you come home
at the end of the day,

you get the sense that your kids
see you as the problem.

They wish you were
the climate change protester

gluing themselves to the glass tower,

not the person sat inside the building.

When I first started working
with people in power,

I was surprised to realize

that they often felt
the least powerful of all,

and most of these leaders
perform mental gymnastics

to get away from those
uncomfortable feelings.

When I ask leaders to describe
the future they envision,

it’s something of a techno utopia.

Flying cars in a world
where deadly diseases are eradicated.

Yet when I asked eight and nine-year-olds
in the classroom the same question,

the future they describe
is a dystopian blockbuster.

when they grow up.

Numbing yourself to our
hyper-consumptive culture, sleepwalking,

even though the science tells us
that we’re hurtling toward the cliff.

Because while feelings
of anxiety, frustration, anger,

can wake us up to the issues,

they can crush us if we carry the weight
of the world on our shoulders.

Neither despair nor denial help anyone.

They cause us to shut down,

to remove ourselves from the picture.

Despair lumps us with all of it.

“It’s not up to me,
because someone else will fix it.”

Do you hear the similarity?

Despair and denial might appear
to exist on polar ends

of the generational spectrum,

yet they stem from the same place.

How powerless we feel.

I believe that the threat,
even greater than climate change,

is how powerless we feel
in the face of it,

And I don’t believe
we will solve this crisis

or act on the many opportunities
it presents us with

So how do we shift out of despair,

out of denial, towards something
radically different?

There’s a quote in “Spider-Man”:

Yet what if the opposite is true?

What if it’s really “with great
responsibility comes great power?”

have known to be true.

They simply decided to make themselves
personally responsible.

Now, solving climate change
is not your responsibility

because it’s outside of your control.

What you are responsible for

is the thing inside your control,

indeed, the only thing
that has ever been inside your control.

We all have stories running on repeat,

stories that immobilize us,

stories the world impresses upon us
in boardrooms and classrooms alike.

I’m too small to make a difference.”

“I don’t have the experience.”

“The system is too broken,

our leaders too shortsighted,

our society too shackled
to the status quo.”

These stories paralyze us.

for the planet and for ourselves.

Which story gets in the way
of you taking action?

Then think of the one thing you could do
to challenge that story.

If your story is
that you’re not smart enough,

you could challenge it
by focusing on the skills and talents

and gifts that you bring to the table.

If fashion is your passion,

how do we reimagine our relationship
with clothes to be fully circular?

If you love making food,

how do we stop a third of it
from being wasted every single day?

If you’re a talented musician,

how do we communicate
the urgency of climate action

through a universal language?

If your story is
that the system is too broken,

the problem is too big to fix,

visualize what it would look like
for you to focus on a single problem.

The climate crisis is the symptom
of many interconnected problems,

from food waste to fast fashion,

social inequality to how we’ve divorced
ourselves from nature.

Every problem requires a solution.

A solution delivered by a someone,

When you look back on your own life,

what do you want to see?

Will you have chosen despair, denial,

Will you have been a spectator
to our planet’s problems

or the person who did
something to fix them?

What will your story be?

Sustainability is the key to our planet’s future and our survival, but it’s also going to be incredibly lucrative and a major piece of our world economy. Hear from these seasoned investors and founders how VCs and startups alike are thinking about greentech and how that will evolve in the coming years. 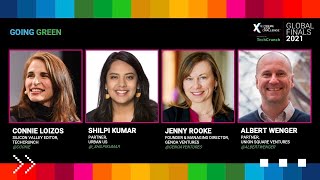 Sustainability is the key to our planet’s future and our survival, but it’s also going to be incredibly lucrative and a major piece of our world economy. Hear from these seasoned investors and founders how VCs and startups alike are thinking about greentech and how that will evolve in the coming years.

Mining and Process Solutions, a non-toxic, natural alternative to cyanide and acid for the extraction of metals in mining operations. 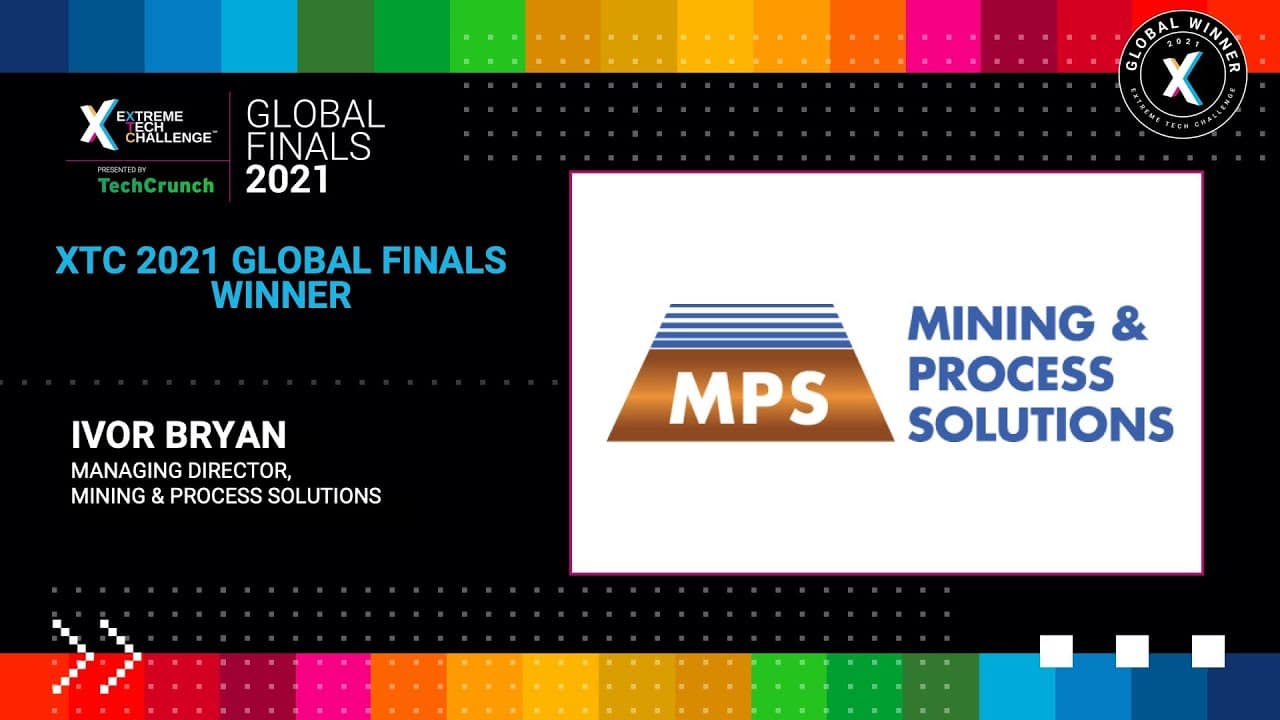 Mining and Process Solutions, a non-toxic, natural alternative to cyanide and acid for the extraction of metals in mining operations.

The Live Green Co. is building a proprietary technology platform, Charaka, to replace not only the animal but also the synthetic and ultra-processed ingredients in food products with 100% natural, functional and sustainable plant alternatives at ten times R&D speed and savings. Its vision is to reimagine all the food products on supermarket shelves at… 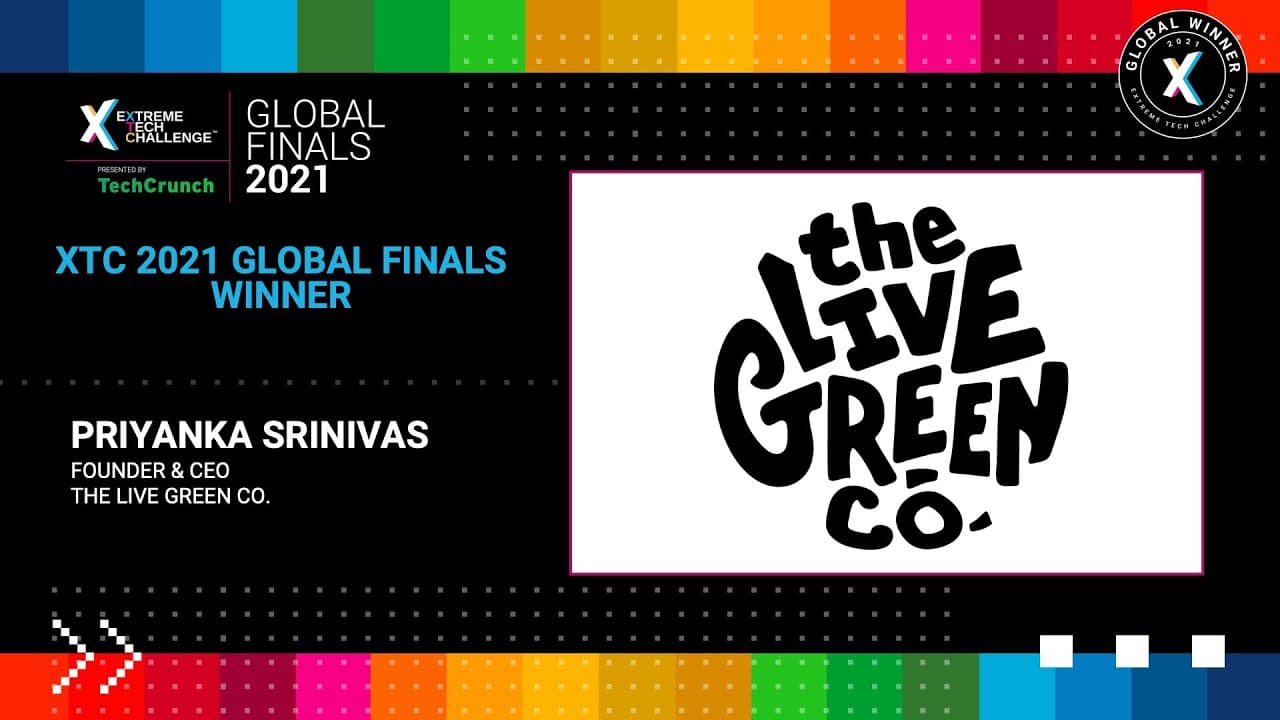 The Live Green Co. is building a proprietary technology platform, Charaka, to replace not only the animal but also the synthetic and ultra-processed ingredients in food products with 100% natural, functional and sustainable plant alternatives at ten times R&D speed and savings. Its vision is to reimagine all the food products on supermarket shelves at scale using Charaka, to disrupt the way the world eats.